أعوذبِاللَّـهِ مِنَ الشَّيْطَانِ الرَّجِيمِ
[I Seek refuge in ALLAH from Shaitan - the accursed one]
بِسْمِ اللَّـهِ الرَّحْمَـٰنِ الرَّحِيمِ
[In The Name of ALLAH, The MOST GRACIOUS - THE MOST MERCIFUL]
Surat Al-Baqarah - The Cow
Introduction
As the opening surah (Al-Fatihah) sums up in seven beautiful verses the essence of the Qur'an, so this Surah sums up in 286 verses the whole teaching of the Qur'an.
Virtues of Surat Al-Baqarah
In Musnad Ahmad, Sahih Muslim, At-Tirmidhi and An-Nasa'i, it is recorded that Abu Hurayrah said that the Prophet said,

Do not turn your houses into graves. Verily, Shaytan does not enter the house where Surat Al-Baqarah is recited.)1

"Whoever recites ten Ayat from Surat Al-Baqarah in a night, then Shaytan will not enter his house that night. (These ten Ayat are) four from the beginning, Ayat Al Kursi (Verse 255), the following  two Ayat (Verses 256-257) and the last three Ayat."4 "Then Shaytan will not come near him or his family, nor will he be touched by anything that he dislikes. Also, if these Ayat were to be recited over a senile person, they would wake him up."5

Abu Hurayrah said, "The Messenger of Allah sent an expedition force comprising of many men and asked each about what they memorized of the Qur'an. The Prophet came to one of the youngest me among them and asked him, 'What have you memorized (of the Qur'an) young man' He said, 'I memorized such and such Surahs and also Al-Baqarah.' The Prophet said, 'You memorized Surat Al-Baqarah' He said, 'Yes.' The Prophet said, 'Then you are their commander.' One of the noted me (or chiefs) commented, 'By Allah! I did not learn Surat Al-Baqarah, for fear that I would not be able to implement it.7 The messenger of Allah said,

(They were angels, they came close hearing your voice (reciting Surat Al-Baqarah), and if you had kept reading, the people would have been able to see the angels when the morning came, and the angels would not be hidden from their eyes.)9

Imam Ahmad said that Abu Nu`aym narrated to them that Bishr bin Muhajir said that 'Abdullah bin Buraydah narrated to him from his father, "I was sitting with the Prophet and I heard him say,

He kept silent for a while and then said, 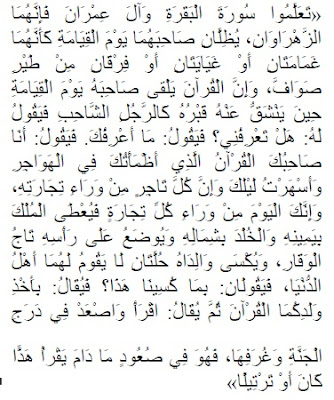 (Learn Surat Al-Baqarah and Al 'Imran because they are two lights and they shad their people on the Day of Resurrection, just as two clouds, two spaces of shade or two lines of (flying) birds. The Qur'an will meet its companion in the shape of a pale-faced man on the Day of Resurrection when his grave is opened. The Qur'an will ask him, 'Do you know me' The man will say, 'I do not know you.' The Qur'an will say, 'I am your companion, the Qur'an, which has brought you thirst during the heat and made you stay up during the night. Every merchant has his certain trade. But, this Day, you are behind all types of trade.' Kingship will then be given to him in his right hand, eternal life in his left hand and the crown of grace will be placed on his head. His parents will also be granted two garments that the people of this life could never afford. They will say, 'Why were we granted these garments' it will be said , 'Because your son was carrying the Qur'an.' It will be said (to the reader of the Qur'an), 'Read and ascend through the levels of Paradise.' He will go on ascending as long as recites, whether reciting slowly or quickly.)"10

A part of this hadith is also supported by other hadiths. For instance, Imam Ahmad recorded that Abu Umamah Al-Bahili said he heard the Messenger of Allah say,

The Prophet then said,

(On the day of resurrection the Qur'an and its people who used to implement it will be brought forth, preceded by Surat Al-Baqarah and Al 'Imran.)

An-Nawwas said, "The Prophet set three examples for these two Surahs and I did not forget these examples ever since. He said,

(They will come like two clouds, two dark shades or two lines of birds arguing on behalf of their people.)12

It begins (verses 1-29) by classifying  men into three broad categories, depending on how they receive Allah's message.

This leads to the story of the creation of man, the high destiny intended for him, his fall, and the hope held out to him (verses 30-39).

The story of the Children of Israel (Prophet Jacob) is then told according to their own records and traditions - what privileges they received and how they abused them (verses 40-86), thus illustrating again as by a parable the general story of man.

In particular, reference is made to Moses and Jesus and their struggles with an unruly people: how the people of the Book played false their own lights and in their pride rejected Muhammad, who came in the true line of Prophets (verses 87-121)

They falsely laid claim to the virtues of Father Abraham; he was indeed a righteous Imam, but he was the progenitor of Ismail's line (Arab) as well of Israel's line, and he with Ismail built the Ka'bah (the House of Allah in Makkah) and purified it, thus establishing a common religion, of which Islam is the universal exponent (verses 122 - 141)

The Islamic Ummah (brotherhood) having thus been established with its definite center and symbol, ordinances are laid down for the social life of the community, with the proviso that righteousness does not consist in formalities, but in faith, kindness, prayer, charity, probity, and patience under suffering. The ordinances relate to food and drink, bequests, fasts, jihad, wine and gambling, treatment of orphans and women, etc, (verses 168-242)

Lest the subject of Jihad should be misunderstood, it is taken up again in the story of Saul, Goliath and David, in contrast to the story of Jesus (verses 243-253)

And so the lesson is enforced that true virtues lies in practical deeds of manliness, kindness, and good faith, and Allah's nature is called to mind in the sublime Ayah al Kursi, the Verse of the Throne (Verse 255). (verses 254-283)

The Surah ends with an exhortation to Faith, Obedience, a sense of Personal Responsibility, and Prayer (verses 284-286)

This is the longest Surah of the Qur'an, and in it occurs the longest verse (282). The name of the Surah is from the Parable of the Heifer in verses 67-71, which illustrates the insufficiency of carping obedience.

When faith is lost, people put off obedience with various excuses; even when at last they obey in the letter, they fail in the spirit, which means that they get fossilized, and their self-sufficiency prevents them from seeing that spiritually they are not alive but dead. For life is movement, activity, striving, fighting against baser things. And this is the burden of the Surah.

This Surah was revealed in Madinah.

2. This Hadith was collected by An-Nasa'i in Al-Yawm wal-Laylah, and Al-Hakim recorded it in his Mustadrak and then said that its chain of narration is authentic, Although the Two Sahihs did not collect it.

3. Recorded by Ad-Darimi in his Musnad.

4. Recorded by Ad-Darimi in his Musnad.

6. This Hadith was collected by Abu Al-Qasim At -Tabarani, Abu Hatim Ibn Hibban in his Sahih and Ibn Marduwyah.

8. This is the wording collected by At -Tirmidhi who said that this Hadith is Hasan. In another narration, At-Tirmidhi recorded this same Hadith in a Mursal manner, so Allah knows best.

9. This is the narration reported by Imam Abu Ubayd Al-Qasim bin Salam in his book Fada'il Al-Qur'an.

10. Ibn Majah also recorded part of this Hadith from Bishr bin Al-Muhajir, and this chain of narrators is Hasan, according to the criteria of Imam Muslim.

11. Also, Imam Muslim narrated this Hadith in the Book of Prayer.

12. It was also recorded in Sahih Muslim and At -Tirmidhi narrated this Hadith, which he rendered Hasan Gharib.

This place is for discussion

Bismillah! The Prophet (peace be upon him) said, ‘Teach your relatives the recitation of Surah Yusuf, for, any Muslim who recite...

"Read the Qur'an, for it will come as an intercessor for its reciters on the Day of Resurrection.''
~ Prophet Muhammed (SAWS)